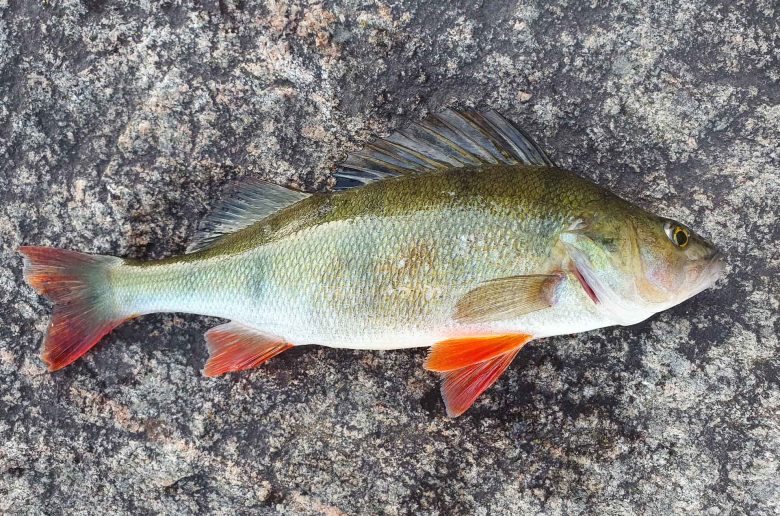 This predatory fish is one of the most common fish that can be found throughout Finland, Sweden and Norway with the exception of the northern most parts of Lapland. It’s a popular game fish and especially popular in the southern parts of Scandinavia where it grows BIG. The Swedish record is a whooping 3.15 kg. That might not seem too much in comparison to other species but for perch a 1kg fish can be already considered a fish of a lifetime. They inhabit rivers, lakes and even the brackish waters of the Baltic and Bothnian Sea, especially the Finnish archipelagos. This fish can get very old and even seemingly small specimen can be several years of age. It tastes delicious and is a tasty table fish.

Perch is a very aggressive fish and they bite usually around the clock with morning and evening being the best times. The best technique to go after perch is jigging but classic spinner and spoons can do the job also very well. You can even set out and perusing perch by classic means with hook, bait and floater. Find spots with deeper waters and drop offs. Perch also like to take cover under natural or man made objects so look out for peers, bridges or overhanging trees.
Perch is the most common fish species in Finland, Sweden and Southern Norway. One prime destination for perch fishing is even right in the middle of Stockholm at Skeppsbron in the old town. The best part is that you even do not need a license to go fishing in Stockholm since it is considered as coastal sea area.
Perch usually hunt in schools. So if you catch one chances are good to get an other one in the same area. Best fishing for perch is usually during summer and early fall. However, perch is also the most popular fish to catch during the ice fishing season (3 – 10 meter). Red and white colors are a good option during this time.

The perch is usually green with dark vertical stripes, the eyes are yellow. Its abdominal, stern and caudal fins are red-orange and the thoracic and dorsal fins are translucent gray. The fins have small black dots, the dorsal fins have a narrow black border and there is a black spot on the back of the first dorsal fin. The stomach is pale, it can become orange in older specimen.

The degree of darkness of perch coloration varies widely: it can be brown, almost black in dark waters and groundwater, or light brown in clear water and sand-gravel bottom water. There are also different color variations: some individuals have varying degrees of black pigment disorder, with the general color being yellow-orange and the fins being red, also called ‚gold perch’. Blue perch have also been obtained. The extent of color variations is individual.

The bones of the first dorsal fin are sharp-pointed spines, the first bones of the abdominal and stern fins are also spines and there is a very sharp spine at the back of the gill cover. The head, gills and scales are large. The teeth of the jaws are small, rasp-shaped and the scales are sturdy and have small spines at the back. 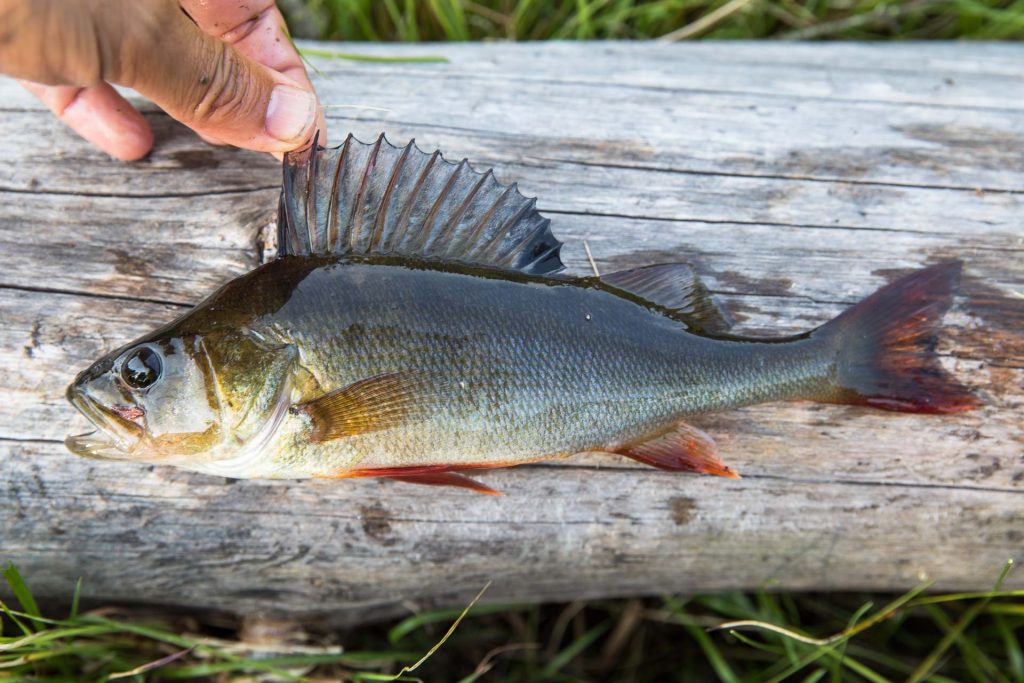 Perch is a flock of fish that moves and seeks food during the day in flocks. At night they dwell usually alone at the bottom to rest. Perch migrate between breeding and feeding areas. In coastal waters, flock movements are usually less than 10 kilometers long, but they can also travel distances of more than 160 kilometers.

The perch reaches sexual maturity at the age of 2–5 years when it is 9–14 cm long. Spawning begins when the water temperature exceeds six degrees in shallow coastal waters. When the water warms up they gradually move to waters up to 3 meters deep. In southern Scandinavia, spawning begins in April-May. The spawning season extends to June, in cold waters up to July.

At the start of spawning, the males arrive at the spawning ground before the females. When the female arrives in the area, the males set out to follow immediately to fertilizes the eggs. Hatchlings between 5 and 7 mm in length hatch after 10 to 20 days. The hatchlings are first spread into the free water area to eat zooplankton and the majority gradually move to shallower (coastal) waters to grow.

Small individuals eat zooplankton, but as it grows, insects, benthic animals, and fish enter the diet. Large perch eat mainly fish. Perch prey on food throughout the bright period of the day, but they are most active during morning and evening hours.

The growth rate of perch varies greatly depending on the feeding situation of the habitat and the density of the stock. The neck of a fast-growing perch can form stiff and steeply rising.

Perch is a viable species. It is widespread in Finland, Sweden and brackish waters in Europe, with the exception of Iceland, the Norwegian Mountains, the Iberian and Apennine Peninsulas, and the western and southern parts of the Balkans. In Southern and Central parts of Finland and Sweden you’ll encounter perch in almost all waters.

Perch suffers from advanced eutrophication and acidification. However, perch tolerate acidic water better than most other Scandinavian fish.

The flesh of the perch is pale and very tasty. It is fished for food and can be caught by almost all fishing techniques. In Finland as an example, catches have vary usually between 6 and 16 million kilograms per year.