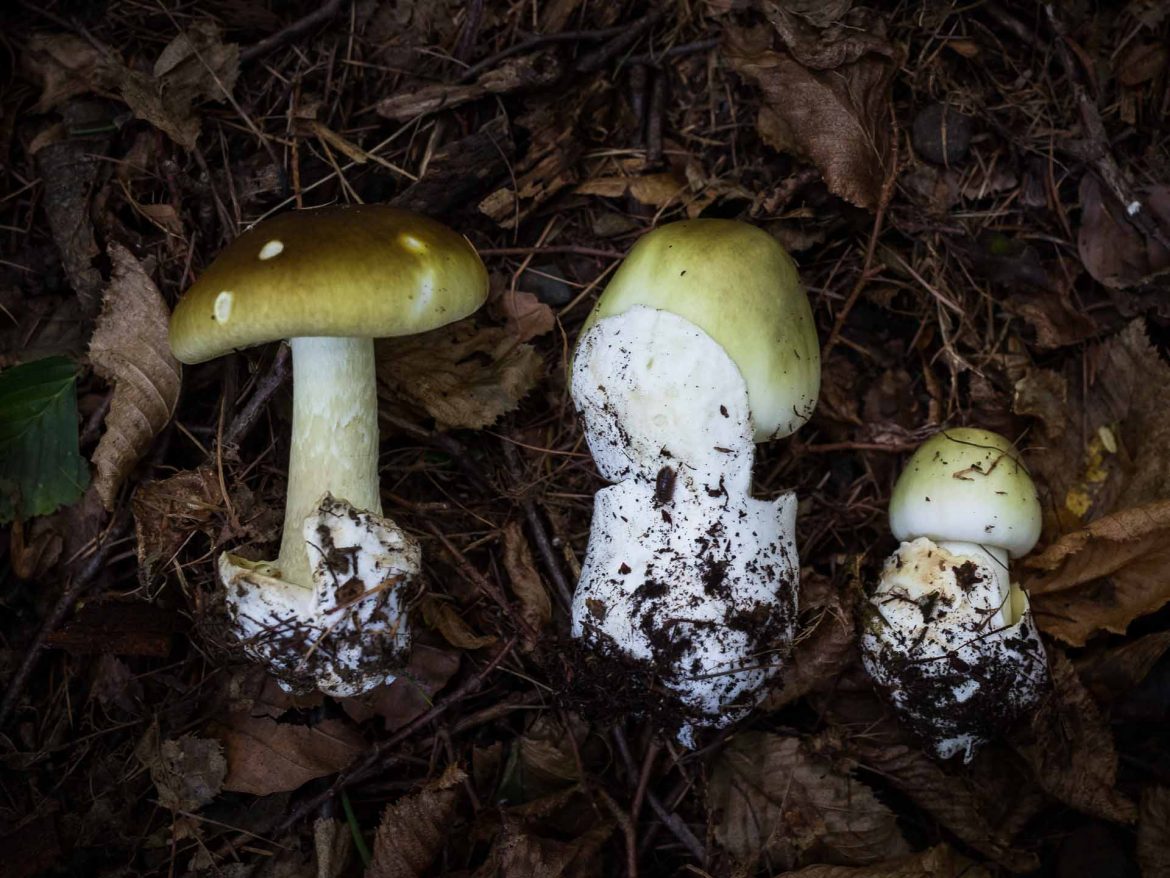 “Among the things not to be eaten rashly, I would include mushrooms because, although they are good food, they have been discredited by a known murder case, as this was the means by which the Emperor Tiberius Claudius got from his wife Agrippina was murdered. In doing so she gave the world and especially herself another poison - her own son Nero.”(Plinii Secundi, 1st century AD [1582])

The deadly reputation of many mushrooms has accompanied these organisms for millennia. The Greeks and Romans have numerous writings on this, the most famous of which report the alleged murder of the emperor Tiberius Claudius who was murdered by his wife Agrippina to help her son Nero to the throne. Pope Clement VII (1537) and Emperor Karl VI (1740) are also said to have died as a result of mushroom poisoning.

In fact, fatal mushroom poisoning is unlikely to occur as often as is often assumed. Since the Middle Ages, mushrooms have had a relatively low status in the common European population and have been avoided except for a few species.

On the other hand, potentially fatal popular wisdom was propagated for a long time as folk beliefs e.g. in old cookbooks. In the Augsburg cookbook of 1843 it says:

“A fungi becomes suspicious if it looks black, blue, green or multicolored, has a foul odor, when it is tough, it is very sticky to and has a hollow stem. To be on the safe side, add a white onion during cooking. If this becomes dark, it is time to throw away the dishes with the fungi because there are certainly poisonous ones.”

Such and similar instructions as the silver spoon in the mushroom dish are nowadys proofed to be completely wrong. Even harm to animals cannot provide any information about the toxicity of a fungus. Snails and worms have a completely different metabolism than humans and can absorb certain fungal ingredients without harm. If you want to collect mushrooms yourself, it is essential to have a precise knowledge of the objects of desire. Basically, the rule applies that nothing is collected and especially not eaten that cannot be clearly identified. Take that seriously if you value your life and that of others!

Not all toadstools are equal

The most famous of all poisonous mushrooms is by far the fly agaric (Amanita muscaria). His eye-catching appearance and hallucinogenic properties have made him the protagonist of many myths and tales. Under its current name it was mentioned for the first time by Albertus Magnus in his famous work ‘De vegetabilis’:

Magnus speaks of a fungus that immediately causes death and calls it ‘fungus muscarum’ (fly mushroom), which when powdered in milk kills flies. Today we know that fly agarics are poisonous but not deadly. In some cultures it is even considered an excellent edible mushroom after special preparation. In Europe too, fly agaric were served in the kitchen with special preparation in some places in the post-war period e.g. in Germany.

As a member of the Amanita family, his closest relatives include both the deadly green Amanita phalloides and the Caesars mushroom (Amanita Caesare), which was already highly praised by the Romans. A broad spectrum of realtives that clearly illustrates how close culinary delights and deadly poisoning are within a mushroom family. 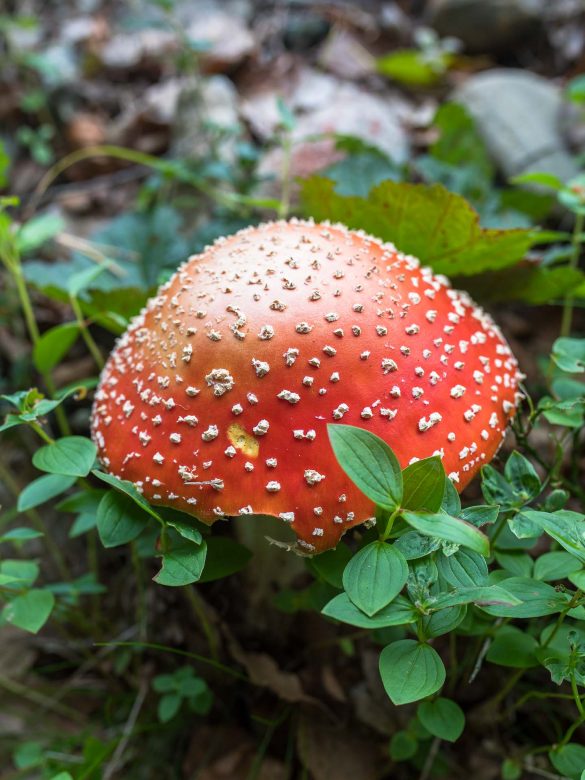 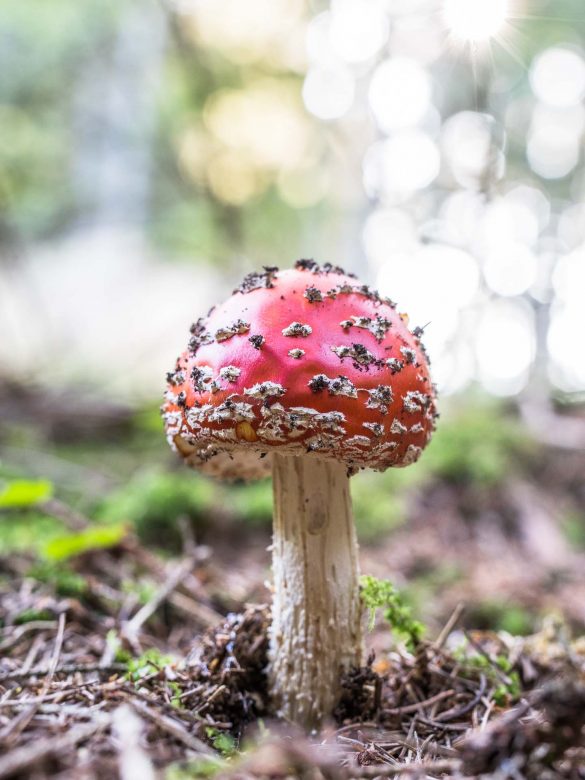 The cultural importance of mushroom poisons

There are entire books on the fly agaric, mostly dealing with the use of the mushroom as a ritual drug and its cultural and historical significance in various societies. The importance of fly agarics as a symbol of luck still testifies to the profound meaning that this mushroom has had for millennia and some even believe that even Santa Claus can be traced back to archaic fly agaric rituals. Psychoactive ingredients are usually listed as a separate group of mushroom toxins, which countless authors have dealt with over the past few decades.

Works like those by Carlos Castaneda or Gordon Wasson on their experiences with mushrooms containing psilocybin have triggered a veritable run on this group of mushrooms in the western world since the 1960s. From a culinary point of view, they are of no importance, but their popularization through to assimilation in the mainstream has led to a completely new confrontation with these organisms. Edible mushrooms are likely to have benefited from the newly gained attention in the following decades.

So not all poisonous mushrooms are the same. In addition to the psychoactive mushroom toxins, there are usually 5 other groups of toxins.

(phalloidin syndrome) include, for example, fungi from the family Amanita (e.g. Amanita phalloides) and also Lepiota. This poison group is responsible for most fatal mushroom poisoning. Symptoms of poisoning can have a very long latency period of up to 24 hours and can be fatal even in spite of optimal medical care. Even small amounts of these mushrooms can have serious consequences. Symptoms: circulatory disorders, nausea, headache, disorientation as well as pain in the limbs, cramps, heart attack, etc.

(Orellanus syndrome), such as those found in many webcaps (Cortinarius spp.), lead to kidney failure. Long latency periods of over 2 weeks also often make it difficult to identify such poisoning in time. Symptoms: organ damage, high blood pressure, dryness in the mouth, etc.

Disorders in the gastrointestinal tract

are one of the most common consequences of poisoning after mushroom consumption. Classic representatives are pungent and bitter-tasting fungi from the Russula family, certain coral mushrooms, earth balls (Scleroderma) or sulphur tuft (Hypholoma capnoides). Many classic edible mushrooms are also incompatible with raw consumption or insufficient preparation. The first symptoms of intoxication can already appear after 15 minutes. In comparison with the two previous groups, these poisonings are in most cases rather harmless and recovery is rapid. Symptoms: nausea, vomiting, diarrhea, abdominal pain, etc.

Other factors that can lead to mushroom poisoning

In addition to the listed mushroom toxins, there are a number of other factors that can lead to severe to fatal intolerance. The combination with alcohol can also cause poisoning in some fungi e.g. from the genus Coprinus due to a high coprin content (Coprinus syndrome). Alcohol should therefore be avoided, especially when consuming Shaggy manes (Coprinus comatus). Mushrooms such as the Slippery jack (Suillus luteus) contain allergens and in some cases can also cause severe intolerance.

Some fungi also accumulate high amounts of heavy metals such as mercury or cadmium. Unfortunately, this also includes the very popular porcini mushrooms aka cep (Boletus edulis) and other edible mushrooms. When collecting wild mushrooms, care should be taken to avoid particularly polluted locations such as roadsides, urban centers, rubbish spots and the like.

The long-term effects of Chernobyl in Europe are also still noticeable in some species through very high levels of cesium-137. These mushrooms should only be eaten in small quantities, and Paracelsus’ much sought-after sentence applies particularly to them: “All things are poison and nothing without poison; only the dose makes that a thing is not a poison.”

What to do with mushroom poisoning?!

If you suspect severe mushroom poisoning, you should immediately contact a poison control center or seek medical care. It is always important to keep in mind that a few days and even a week or two can pass between consumption and the onset of the first symptoms of intoxication.

Always remember the most important rules of mushroom foraging:

This overview does not replace mushroom guides. We have compiled this overview with the best of knowledge and belief, but do not claim to be complete and reserve the right to make errors! 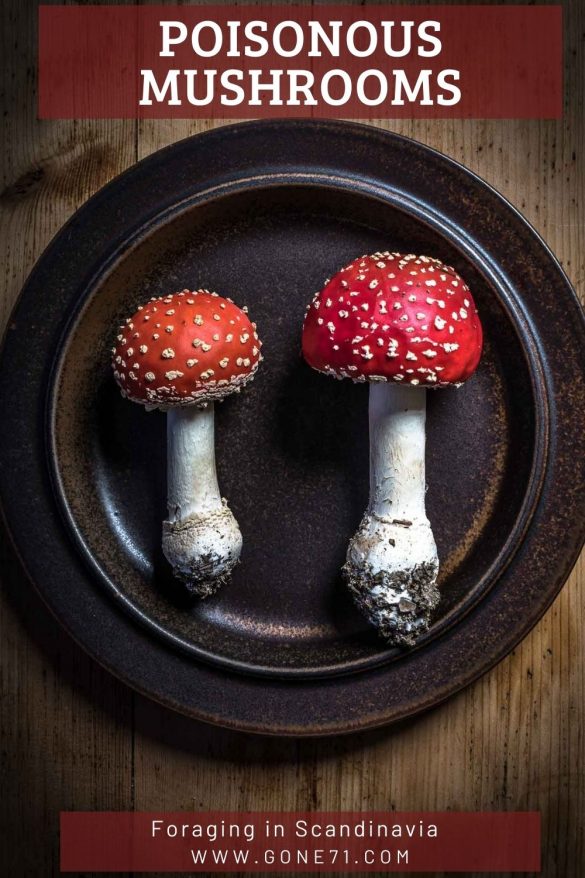 Encounter whales and dolphines in Norway (on your own)