The velvet bolete is a very popular mushroom in Northern Europe and especially in Finland we have met many people who adore it. The sandy soil allows it to grow in abundance there. They are a constant companion through all Nordic pine forests far beyond the Arctic Circle.

Although the Finns have a reputation for being shy and introverted, on our last trip up north, a Finn joined us around the campfire at a wilderness hut and unpacked some of these mushrooms. He then simply stuck the small buttons onto a wooden skewer and roasted them over the fire. He said he likes them better than porcini mushrooms. We leave it open whether this preparation is really advisable for mushrooms of the Suillus family – our Finnish colleague was certainly very convinced and obviously didn’t do it for the first time.

Appearance and habitat of the velvet bolete

The velvet bolete is considered an excellent edible mushroom that is not only appreciated in Finland. The mushroom is also very popular in our Central European latitudes and is sometimes also compared to porcini. In any case, we see it is an enrichment for various kinds of mushroom dishes.

Velvet boletes can be found in mixed and coniferous forests in summer and autumn, especially on sandy soil. Its eponymous velvet cap and dark pores, make it easy to identify. The flesh is yellowish and can turn blue when cut apart, especially in the thick-fleshed cap.
The main foraging time for velvet boletes begins with the humid late summer days and extends well into late autumn. That said, as always this depends on the region you live in.

A bad slander from Wikipedia

If you look at the entries about the velvet bolete on Wikipedia (in different languages) you can get the impression that this mushroom is hardly edible. We cannot quite understand that and feel obliged to comment on this.

There is talk of “…is edible, but is said to smell unpleasant, with a somewhat metallic taste” or “The taste of the velvet bolete is not very aromatic” or “It is an edible but mediocre mushroom because of the flaccidity of its flesh and its chlorinated odor…”… to cite some further entries in German and French. Only The Finns report fairly positively about it – which coincidenc 🙂

We can’t quite understand these impressions and have not had any negative culinary experiences – quite on the contrary, we think it is excellent – we eat only young specimen though.

Maybe it has something to do with the site and region where the mushroom is collected. Velvet boletes are said to accumulate a large amount of iron and we read an recommendation of eating no more than 600g per week. Maybe there is a correlation between very ferrous habitats and taste. That’s at least one hypothesis – proof us wrong ;).

Unfortunately, there are also studies (from Finland) that suggests that velvet boletes tend to accumulate cesium-137. Hence, the location should definitely be taken into account when collecting these mushrooms.

Confusing the velvet bolete with other species

Velvet boletes can be confused with other boletes such as the bovine bolete aka Jersey cow mushroom (S. bovinus), the suede bolete (Xerocomus subtomentosus) and other Xerocomus or the orange larch bolete (S. tridentinus) – all more or less edible.

The most common confusion is probably with the bovine bolete. The velvet bolete tastes much better even though it is similar in appearance.

The bovine bolete has very large, angular pores, a smooth cap skin, does not blue and has a pointed base. The velvet bolete, on the other hand, has very fine, narrow pores, has a much more yellowish flesh-colour and sometimes turns blue.

The velvet bolete in the kitchen

Velvet boletes should be processed quickly after picking as they tend to become spongy. As with all species from the Suillus and Leccinum family, we stick to a minimum cooking time of 15 minutes.

Since this mushroom often occurs in large quantities, we allow ourselves the luxury of only collecting very young specimens.
As a mixed mushroom, it is suitable for most dishes. But we also find it good on its own in risotto, breaded, in sauces or as a tortellini filling. In principle, most mushroom recipes that also work for porcini are suitable, as long as the cooking time is long enough.

For those who don’t like the taste of the velvet bolete or simply have a surplus, we recommend drying the mushroom. We haven’t tried this ourselves yet, but some colleagues of ours swear that they taste similar to morels when dried. It’s on our list and we’ll tell you as soon as we know more! 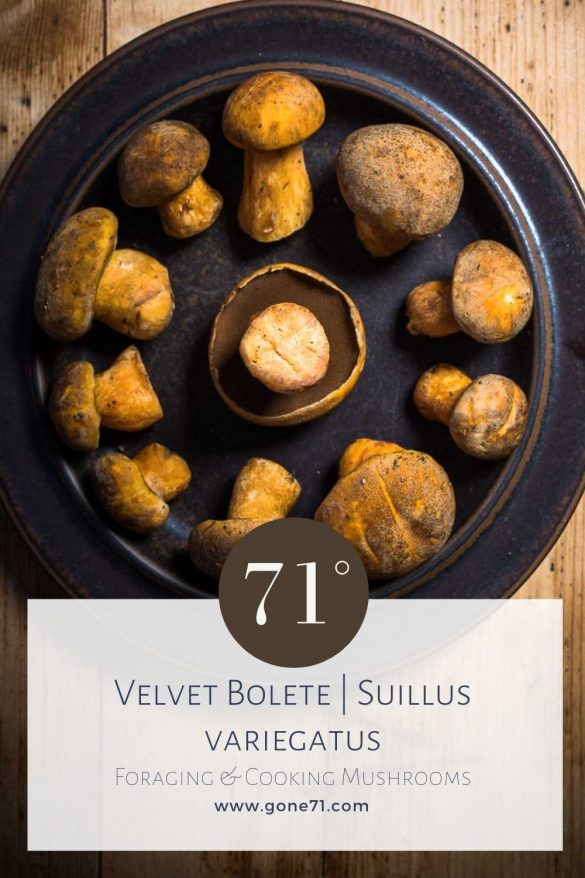