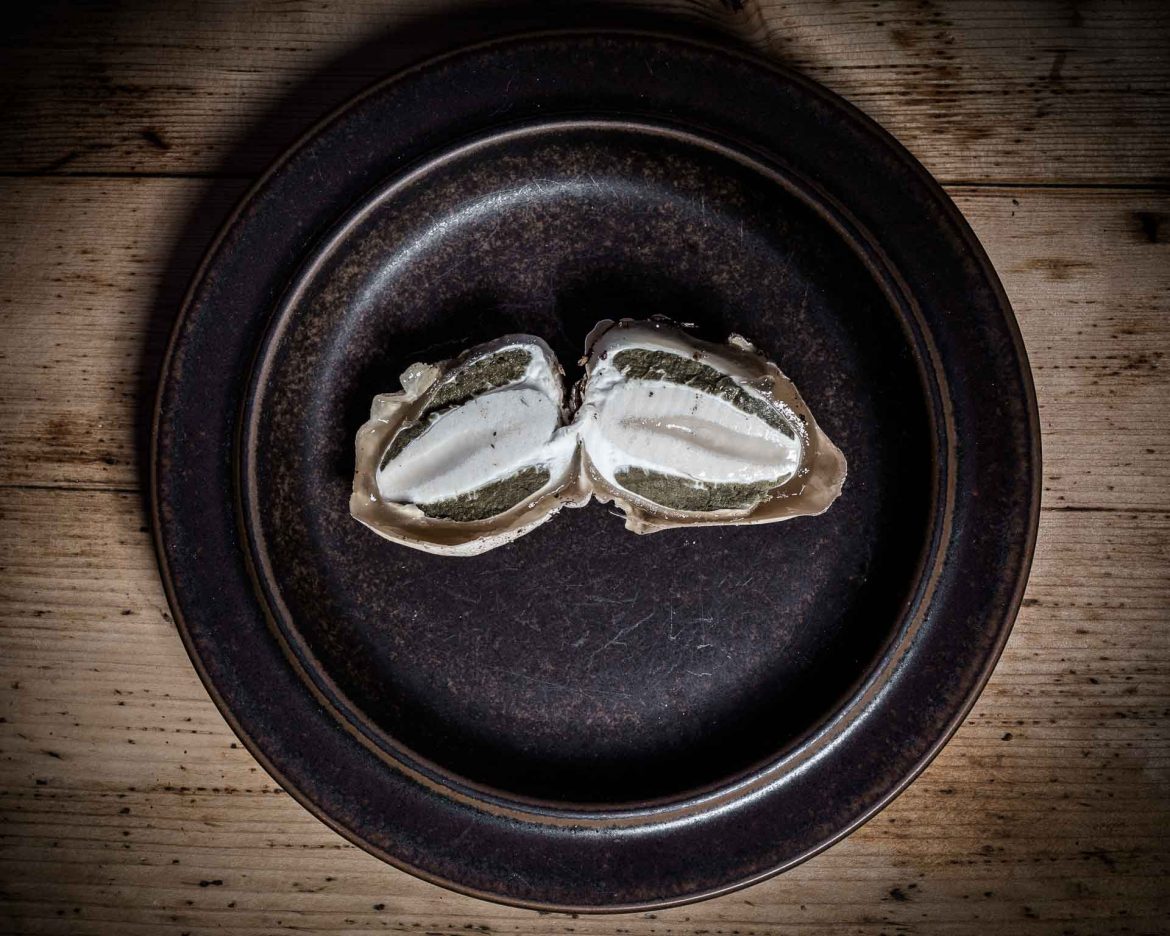 “And even today, among the uneducated, this morel was thought to be an aphrodisiac.” (Thomas Mann – The Magic Mountain)

Stinkhorn is one of the most (in)famous mushrooms and its name precedes it. The stinkhorn is known for its phallus-like appearance and its distinctive smell, which the fruiting body develops as it grows.

Very few people know that the stinkhorn also has culinary qualities and that the mushroom is highly sought after by connoisseurs. Strictly speaking, insiders are on the hunt for the so-called witch’s egg, the young stage of the stinkhorn in which the fungus is still completely covered by the white paper-like volva.

This outer paper like skin protects the gel-like interior that later develops into the strong-smelling spore layer that gives the stinkhorn its name. With increasing age, this gleba layer is degraded and the underlying cap with the morel-like net pattern becomes recognizable. The main collection time for the witch’s egg in Central Europe is in late summer.

The real delicacy lies dormant inside the witch’s egg. The heart (receptaculum) can be removed quite easily and can theoretically even be eaten raw. We prefer the fried version though! The crunchy taste is reminiscent of radish, which is why this mushroom is highly sought after by insiders.

In view of the edible amount that can be obtained from such a heart of the witch’s egg, the whole thing is more to be understood as an appetizer or snack. For a full meal you would need to find a really large amount of fruiting bodies at this particular stage. But for those who are open to new and more unusual tastes, this early phase of the stinkhorn is a must.

In the normal preparation, the outer skin is removed and the inner part under the gel-layer is cut into slices and fried. Prepared in this way, a few witch eggs can be made into a meal. The taste is interesting, but most people are put off by the looks.

Confusion of witch’s egg with other mushrooms

Be careful when collecting witch’s eggs. The young stages of poisonous mushrooms such as the fly agaric (A. muscaria) and other Amanita like the death cap (A. phalloides) can theoretically lead to deadly confusions. The cross-section of the witch’s egg leaves usually little doubt though.

Due to the penetrating smell and its appearance, many legends and myths have formed around the mushroom over the centuries. In popular belief, he was placed in the realm of demons and witches and had very negative connotations. However, some sources also report belief in its potency-enhancing effect, to which the allusion in Thomas Mann’s work “The Magic Mountain” also refers. There is no evidence of this to date, but a certain mysticism still surrounds this mushroom.

In folk medicine, it was also used to treat rheumatism and gout, which is why it is also translated “gout mushroom” in some languages. The gel layer is also used as a facial moisturizer. We haven’t tried it ourselves, but some swear it’s the best product they know for the purpose.

witch’s egg in the kitchen

The outer layer of gel is removed along with the skin above and below, leaving only the greenish middle layer that encloses the white core (both edible). For the preparation, the inside of the witch’s egg (including the green layer) is sliced, seasoned and fried in butter or olive oil. Due to the intense taste, we use it alone and do not mix it with other mushrooms. A salad as a supplement dish is a good choice. Witch’s egg is definitely the category: delicacy among connoisseurs 😉

Some "purists" also omit the greenish layer and only consume the innermost white core, which later becomes the stem. This part is particularly easy to remove if you cut the mushroom in half. However, we find that there really is no need to do without the equally tasty greenish middle layer. Otherwise there is not much left of the mushroom itself.