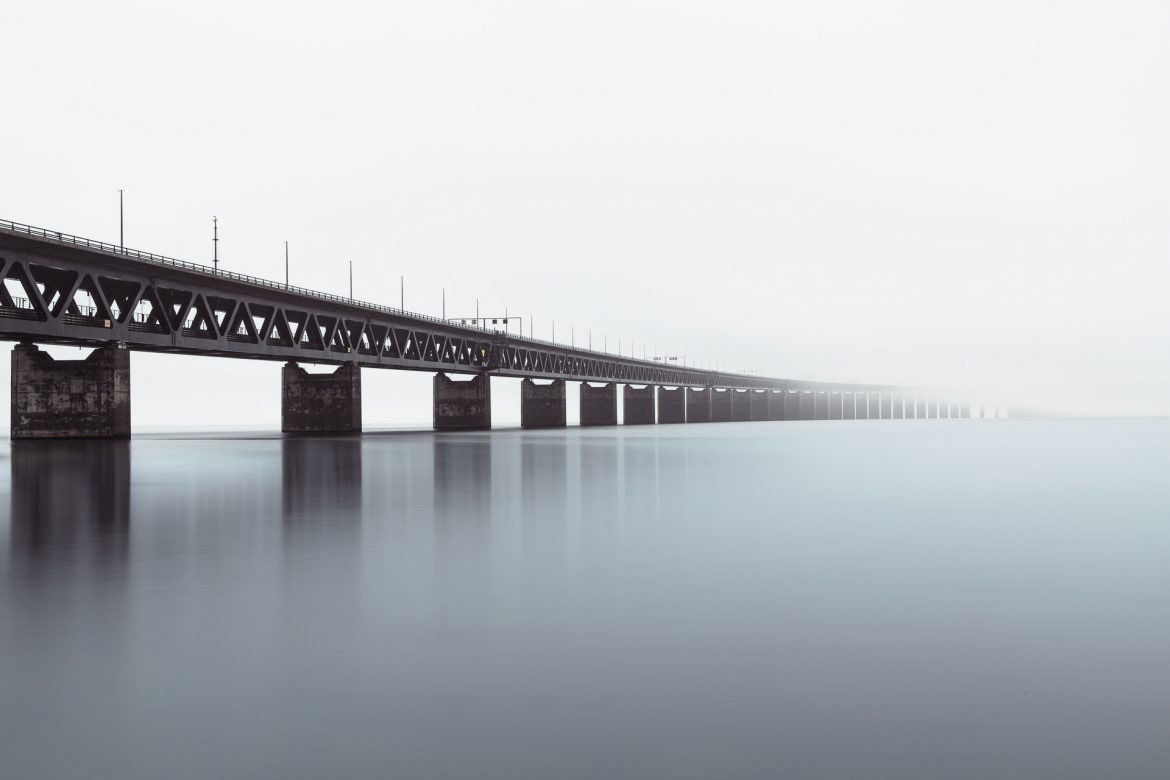 This is a stand alone image from the series ‘The quiet place’ taken at the Swedish end of the bridge near Malmø. ‘The quiet place’ is a long time exposure project by founding member and professional photographer Sebastian Wahlhuetter. This is a single image shot taken over the course of 120 seconds with a neutral density filter.

This impressive building connects the Western European mainland with Scandinavia. The øresund bridge (swe.: Øresundbrun; Dan.: Øresundbruen) runs from the Swedish coast outside Malmø over the Øresund straight to the artificial island Peberholm outside of Copenhagen. From there the E20 road continues for 4 more kilometres until it emerges on the Danish mainland. The total length of the bridge until it ends in the tunnel is 8 kilometres (5 miles). It’s a combined railway and motorway bridge and there are excellent train connections between the two countries.

The bridge exists now for 20 years (opened 1st July 2000) and it took 5 years to build. Before that the only way to the Scandinavian mainland was by ferry or plane respective via the Baltic route and Russia to Finland. The latter one was not really a traveller’s choice for Western Europeans during the Soviet Regime so by ferry was usually the way to go.

The idea of linking Scandinavia with the rest of Europe was already discussed in the beginning of the 20th century. Early ideas suggested a tunnel connection over the entire section and after almost a century of discussions they started the building process in 1995.

Getting to Øresund bridge

If you want to make your own photographic project of the Øresund bridge or simply want to visit this colossal structure you can do so on the Swedish end outside of Malmø.

Crossing the Ørsund bridge by car or camper is can be expensive and in many cases a ferry ticket from Germany will be in a similar price range if you add the fuel coasts. If your vehicle is falls into the magic 6 meter mark a one way ticket will set you back 54 €. If you are 6,01m and above you’ll pay double equalling 108 €. You can save around 10 percent if you book the ticket online. The toll station is on the Swedish side of the bridge. The drive across the bridge and the tunnel will take you around 10 minutes.

There is a fairly good railway connection between Copenhagen and Malmø so if you do not have to cross the bridge by car, this is the more economic way to go. The train ride takes about 35 minutes between Malmø and Copenhagen station.