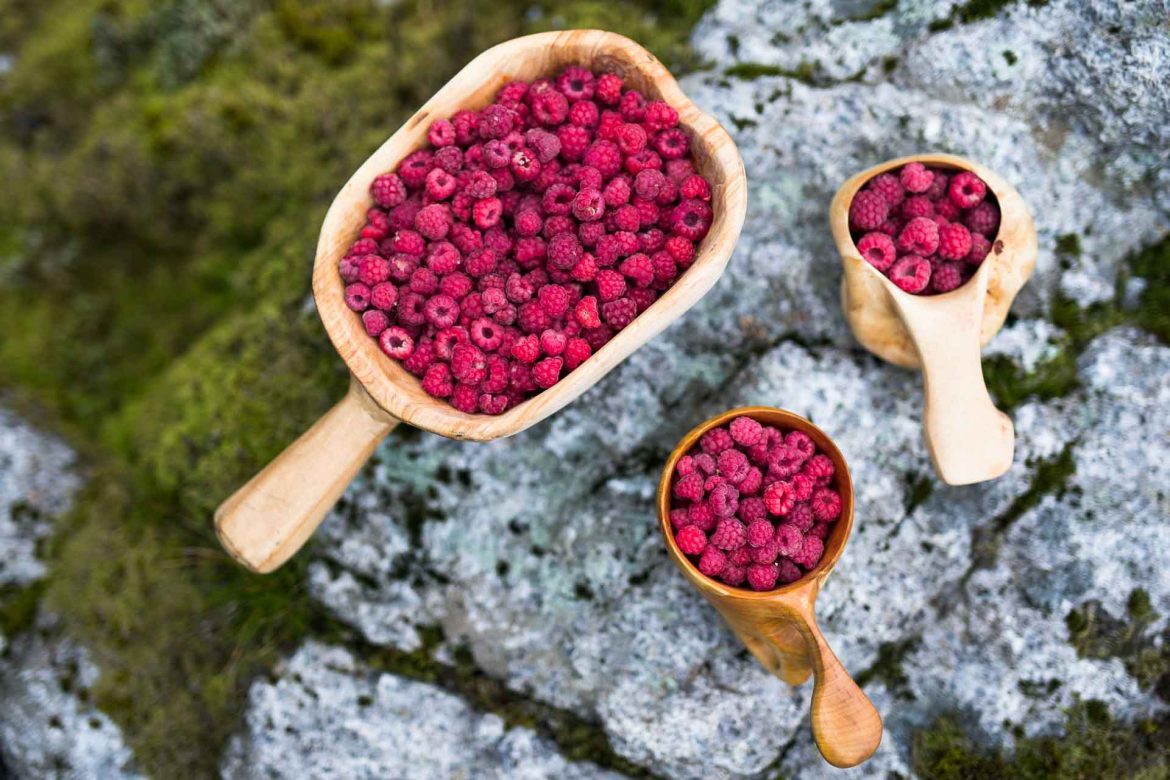 The amount and variety of berries throughout the Scandinavian wild is sheer endless. Summers are short but very intense and the long days make for an annual feast in the northern summer months.

While the northern countries are famous for their vast amount of delicious blueberries, other at least equally tasty berry species are often overlooked. We have picked 10 of our favourite berry species from the north. The best thing about all those berries is, everyone can pick them on private and public land alike due to the right to roam.

WHERE TO FIND: bogs and mountainous wetlands in northern Scandinavia 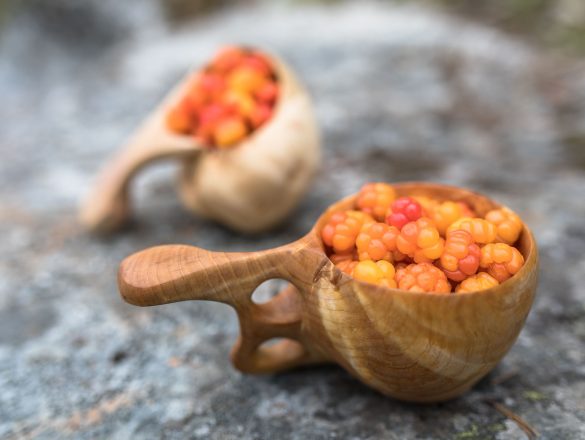 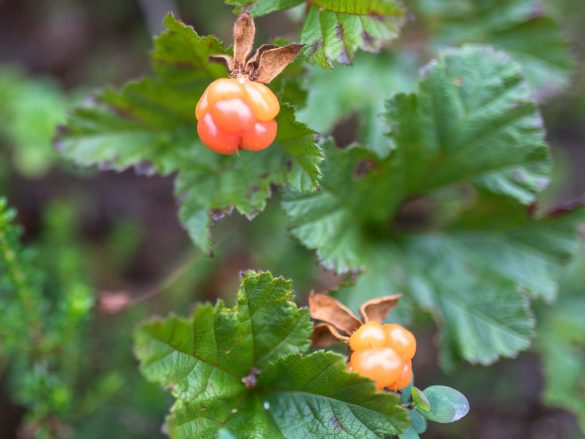 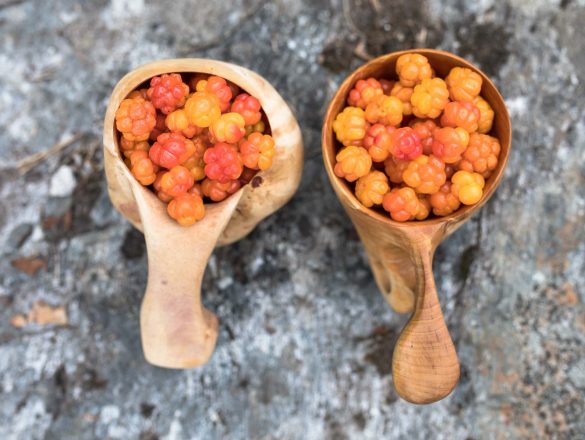 Among Finns, Swedes and Norwegians cloudberries are considered a real delicacy and probably the most sought after berry in Scandinavia. Fresh berries and products are usually very expensive. The small berry from the Rubus family is in the same plant family as raspberries or blackberries. However unlike their better-known relatives cloudberry is primarily a wild plant and rarely cultivated.

Upon season you can usually see the locals with big buckets in the mountain bogs, forests and wetlands on the hunt for the golden arctic gold.

In early stages the berry is red and very hard but when it ripens the colour changes to yello-orange. The ripe fruits taste very juicy, tart and sweet. They are very rich in Vitamin C and A and considered very healthy. Due to natural preservatives they can be stored in their own juice without any additional substances (in the fridge).

In the Nordic kitchen they are usually used in jams, juices and deserts. In Norway they are mixed with whipped cream and served as desert called multekrem. In Sweden, the berries are usually made to marmalades and served with pancakes or ice cream. The Finns (of course) also produce an alcoholic liqueur called lakkalikööri out of the berries.

In our opinion the best way to enjoy this elusive super food is freshly picked from hand straight into your mouth.

WHERE TO FIND: everywhere 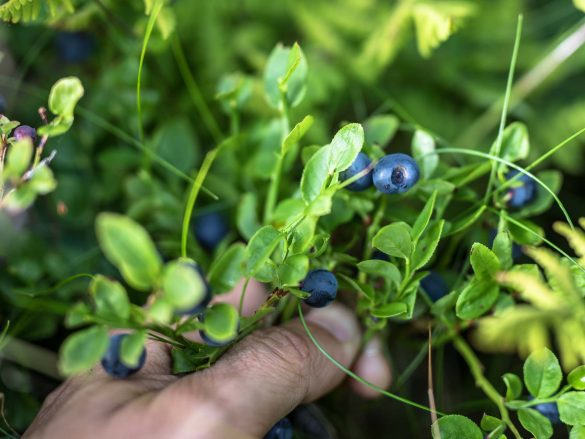 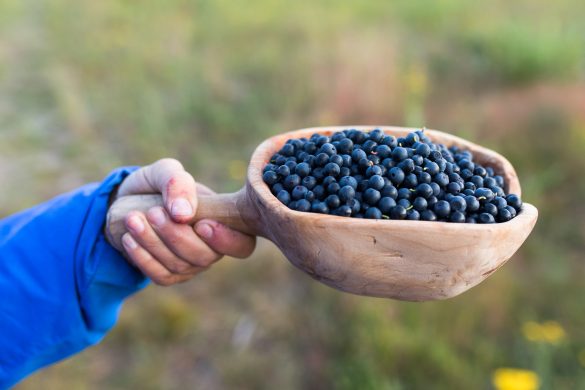 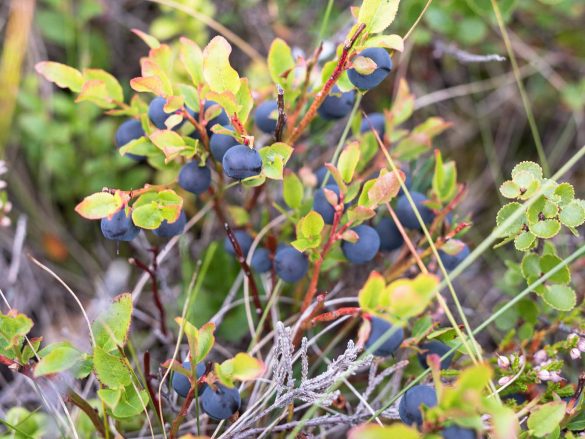 Everybody knows them, everybody loves them. The blue forest gold better known as European blueberry. Strictly speaking the proper English term is actually bilberry but throughout Europe this will earn you suspicious looks. In most European countries the literal translation of the native names for this berry would be translated as ‘blue berry’ (blåbär, blåbær, Blaubeere…). They are in almost all cases not the same as those cultivated blueberries you are used to from the supermarket. Commercially sold blueberries are usually stem from their American relatives.

The main difference to their North American counterparts is a deep reddish blue colour on the inside and size. Bilberries are slightly smaller and contain less sugar – right about perfect for a berry. Bilberry bushes can be found in all northern countries. They cover a vast percentage of the land mass and are omnipresent from the southern most parts of Scandinavia all the way to North Cape.

They have a long history of usage and besides being an important food source the whole plant is known as a medicinal plant. Dried berries are a remedy against diarrhoea while fresh berries can have a laxative effect when consumed in big quantities. Thinned juice can be used as antiseptic gargle solution inflammations in mouth and pharynx. Furthermore the strong colour was long used for dying cloth.

In the northern kitchen, bilberries are mainly used in jams, soups, juices, cakes and other desserts.

WHERE TO FIND: Western and Northern Scandinavia 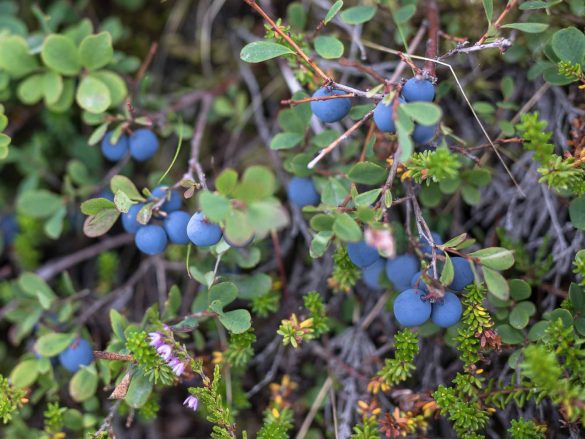 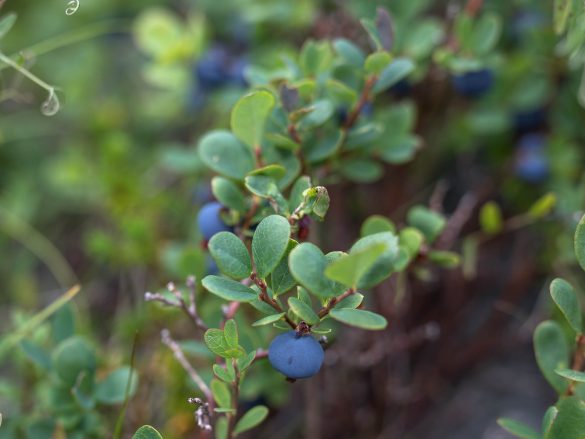 Only a few people realize that there is a second species of bilberies present throughout Scandinavia and Finland. Bog blueberries are larger, more eggshaped and have a lighter flesh on the inside.

Unlike the European blueberry bog blueberries grow mainly in the Western- and Northern parts of Scandinavia and in mountainous regions and mountain bogs around Europe. There is also the subspecies Vaccinum uliginosum microphyllum (swe.: fjällodon) native to the Northern parts of Scandinavia which has smaller leaves and is smaller in its overall appearance. However, the fruits are almost identical and from a foraging perspective they are equal.

Locals usually ignore them and do not pick them for their own sake, as they are considered less tasty then the European blueberries. We actually strongly disagree with this perception and consider these berries as very tasteful on its own. Probably the best way to find out if they are for you is to try them by yourself. 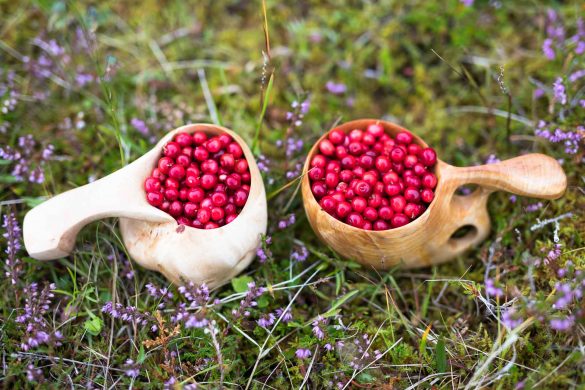 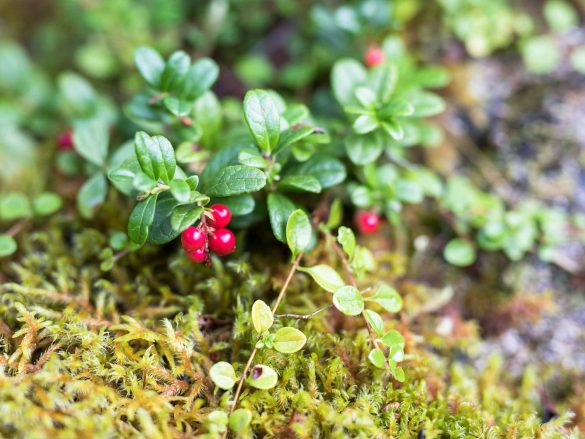 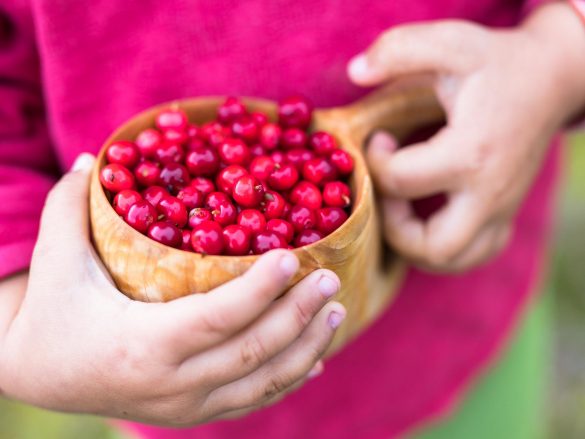 Thus red, lingonberries are also close relatives to the bil- and blueberries. The small berries are very popular in the Scandinavian kitchen. The berries are generally boiled and sugared before being eaten as jam, juice, compote or jelly. They can also be served raw, which means that they are crushed and mixed with sugar.

Due to its high content of benzoic acid, the shelf life of the products is high even at low sugar content. If the fresh berries are submerged in water, they will stay fresh over several months. In Sweden this is called vattlingon. The berries that have not become overripe can be picked with berry pickers. 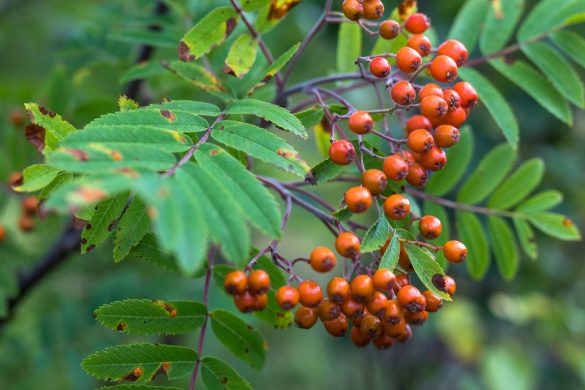 Rowans are found all over Scandinavia and other parts of Europe. The orange to red berries are generally very sour and considered slightly toxic when consumed raw. Heat treatment and to some extend freezing renders it non toxic and rowanberries are usually processed into jellies and jams. They have also a broad tradition in alcoholic beverages as liqeur, wine and schnaps.

After the first (or second…) frost the berries get a much sweeter taste which makes them very suitabel for kitchen use. Rowan berries have a long history in European folklore and they are an essential part of Norse mythology. The story goes that Thor once saved himself by clinging to a rowan tree – thus the name ‘salvation of Thor’ can be found in the Skáldskaparmál (second part of Snorri Sturluson’s Edda). An entry into modern popular culture can be foud in J. R. R. Tolkiens novel ‘The two towers’ where rowans are important trees to the Ents. 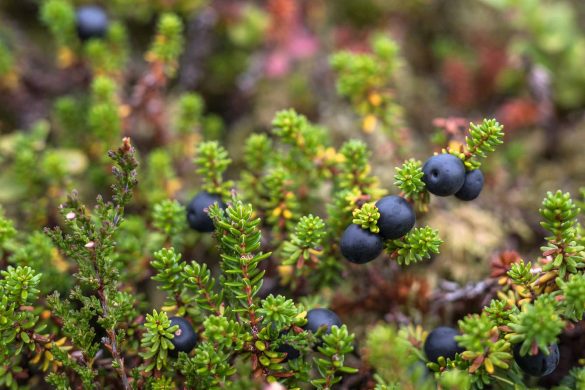 It is usually quite easy to identify a crowberry plant. The small conifer-like leaves have a thin white line along the edge and along with the small black fruits thre is not realy anything you can confuse it with. The fruit is a black, fairly dry berry, reminiscent of blueberries, but smaller and has larger and harder seeds. The berry is a little sweet, but also bitter and many consider it bland. Some believe that the taste is better if the berries are exposed to frost – however we could not verify this so far.

Crowberries are underestimated as food, mainly because more mature people do not appreciate the taste. In older times, however, all ages have eaten crowberries in northern Scandinavia; in the early 20th century mostly children. However, the berries are juicy and suitable for juice, wine or jelly, and they are very rich in antioxidants. They are also said to have a slightly laxative effect.

In many parts of Scandinavia crowberries are omnipresent and can be picked in coastal areas as wel as in high altitudes usually in vast amounts. If you spend a lot of time outdoors and feel firsty or want to nibble on something look for these berries. Who knows, after getting used to it you might even start to like them.

Interesting fact: a typical scandinavian bear can absorb 20,000 kcal a day by grazing crowberries and blueberries in the autumn. A large part, perhaps most, of this comes from crowberries.

WHERE TO FIND: along forest edges, clearings 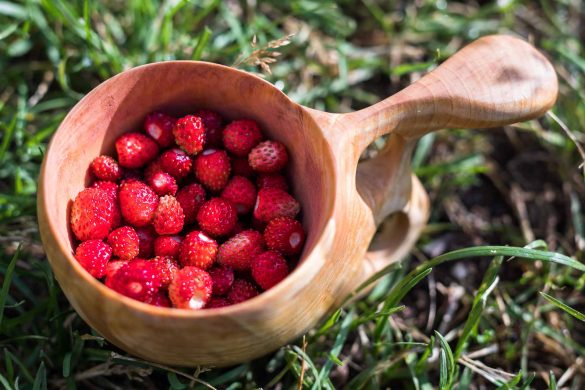 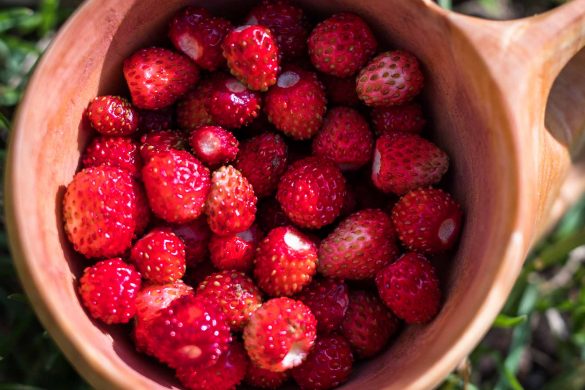 These little red fellows are among the tastiest berries at all. So make sure to eat them all if you encounter them. Unfortunately they are not so easy to find and they grow only for a short period of time. They are very small and lovely sweet. If we would have to pick our favourite berry this would be one of the top contenders. However, finding vast quantities is usually unlikely so eating it raw (on the spot) is a very good choice.

Today, wild strawberries are occasionally used to flavor jams and marmalades. The green seeds of the fruit contain a bitter substance that only appears after a few minutes of cooking. Jam made exclusively from wild strawberries can therefore taste bitter.

In the Nordic mythology, the wild strawberry is associated with the goddess Frigg. The story is that she has hidden the dead children in strawberries so that she could then take them to Valhalla undetected. A more recent but important cultural reference is Ingmar Bergman’s black and white film drama Wild Strawberries (swe. orig. smultronstället). 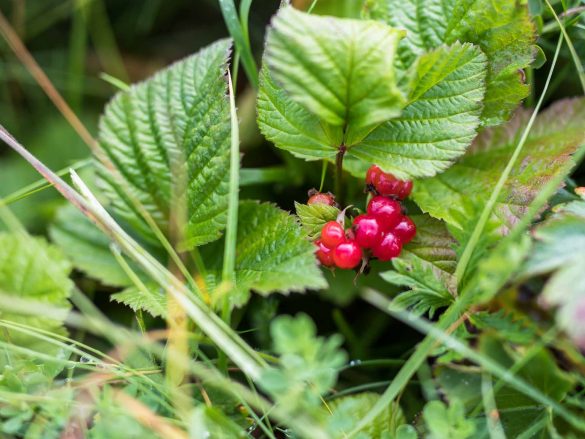 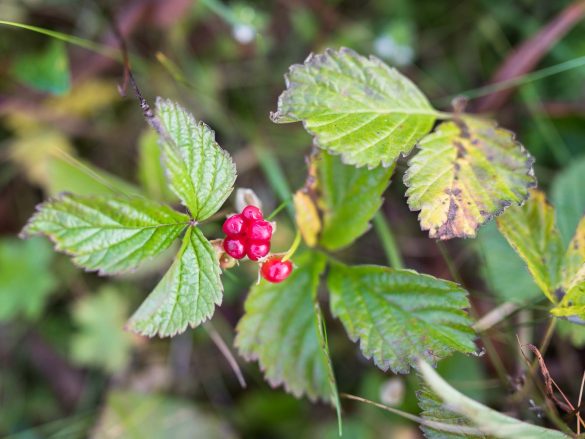 The stone bramble berry is unknown to or overlooked by most people. Yet it is another species from the Rubus family and a close relative to the cloudberry. It can easily be confused with the (very tasty) arctic bramble, which looks similar and also grows in the same habitat. These two berries can even build a hybrid form (Rubus castoreus).

Stone brambles have low stems with 3-fingered leaves, small white inconspicuous flowers reminiscent of the flowers of the raspberry bush, and bright red, sour stone fruits in a small collection, with quite a large fruit stone – hence the name. The stone brambles are very juicy and rich in Vitamin C. Usually they do not occur in large quantities but are very suitable for jams and jellies.

Even though blackberries are cultivated and can be bought in the supermarket we highly advice you to look out for the wild species probably growing in your neighbourhood. 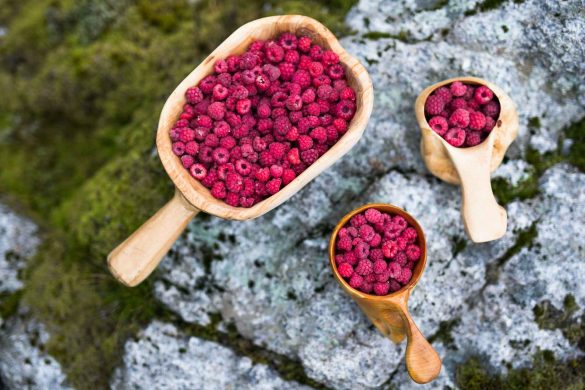 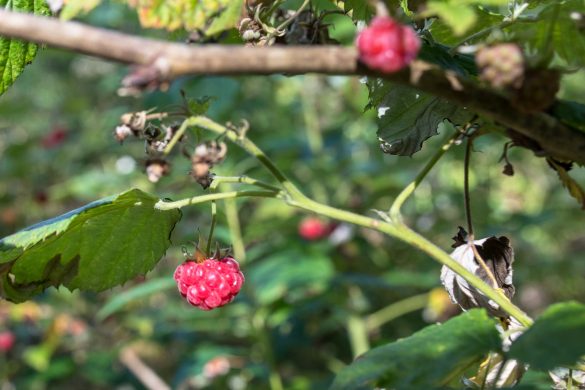 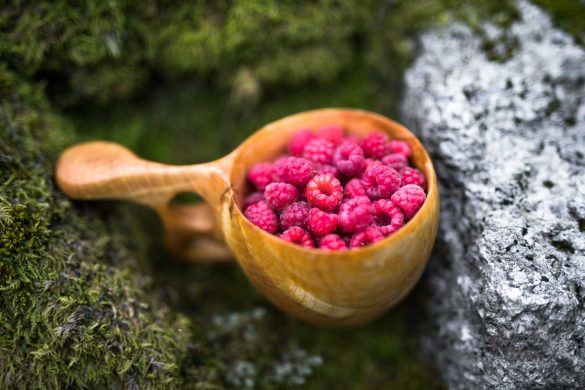 Raspberries have been known as a medicinal plant for thousands of years. They contain a high amount of Vitamin C, potassium and fruit acids, which supposedly benefit the immune system. The healthy fruits healthy are often consumed raw or used in a variety of ways in the kitchen, for example as jam, jelly, compote, juice, cake topping, cold bowl or fruit groats. Since the berries do not ripen after harvest you should leave them growing if you are in doubt if they are ready.

The dried (young) leaves can be used for teas and the fresh leave sprouts can even be eaten raw in salads. Similar to its reltive the blackberry, raspberry leave tea is used in folk medicine for diarreha diseas or for gargling for inflammation in the mouth and throat. As an old home remedy, raspberry leaf tea is also used to prepare for birth. Among other things, it is said to induce labor. There is no scientific proof to this but if you are pregnant you might be careful with this one just in case. 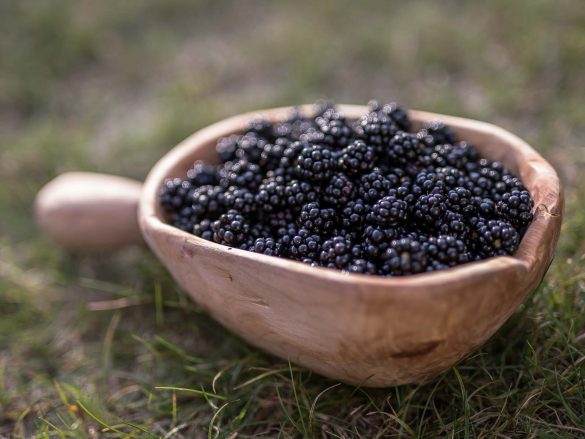 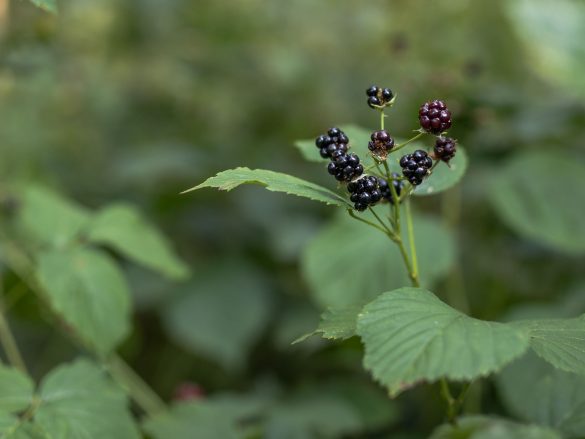 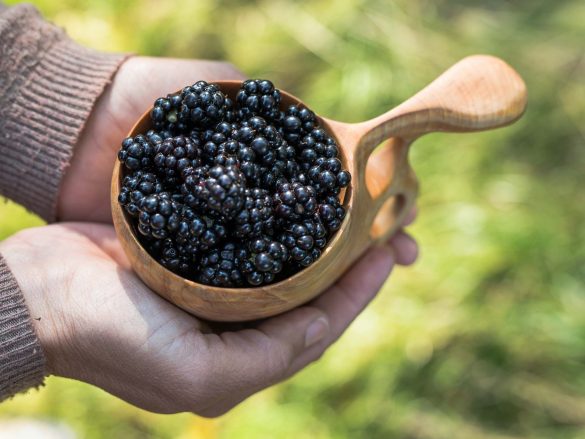 Blackberries are eaten fresh or used in the kitchen to prepare numerous dishes, including jams, jellies, red fruit jelly, sorbets, fruit juice, wine and liqueurs, cakes and tarts and other desserts. However, blackberry jam and jelly are the most important in terms of quantity, both commercially and privately produced from blackberries. Often they are mixed with other berries such as boysenberries, raspberries, blueberries and currants and processed together to make a jam

Blackberries are by far not as common and popular as blueberries throughout Scandinavia but they are still a very delicious treat with impressive health benefits. They are very rich in Viamin C and K and contain a lot of magnesia, fiber and antioxidants. The ripe berries are sweet with an tart note. If you have never picked blackberries be adviced to look out for the sharp thorns that can be very unpleasant if overlooked. 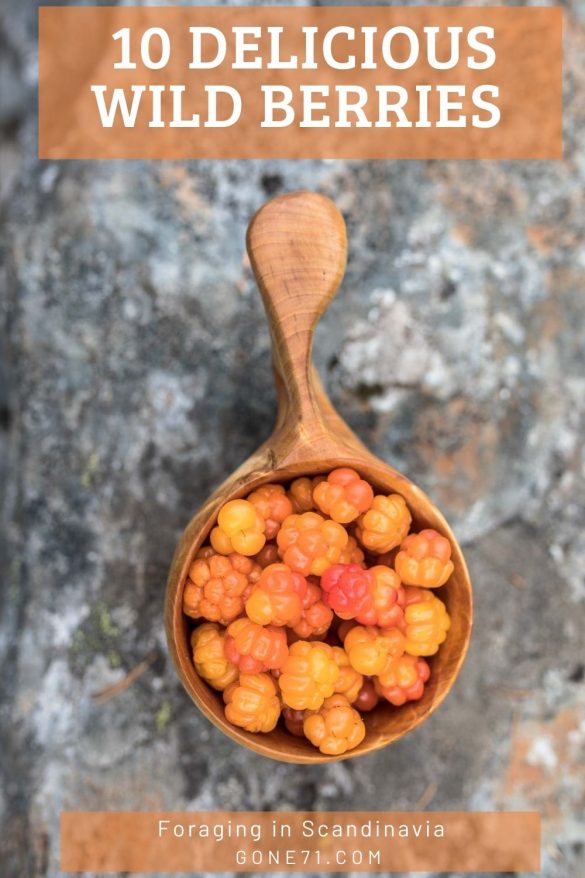