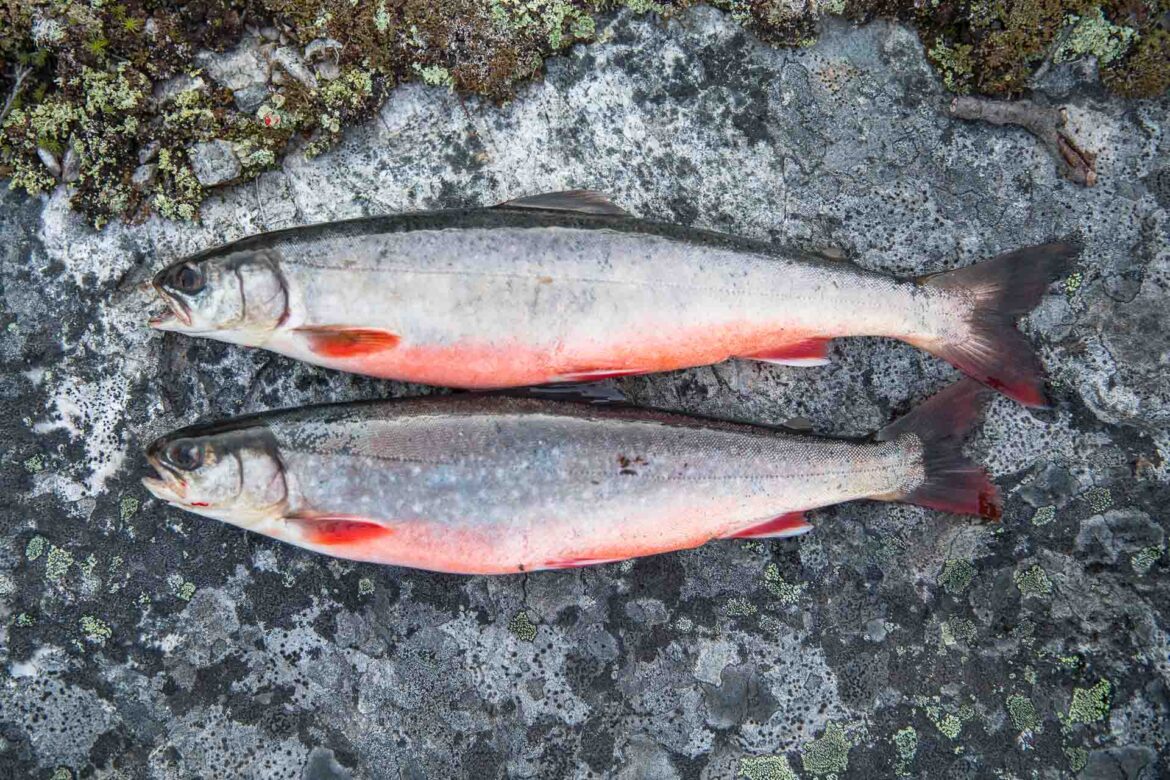 The mighty arctic char is one of the most beautiful fish and well known for the red bellies the male specimens get when becoming mature. It also happens to be one of the most delicious species swimming around and a sought after fish among chefs.

Arctic char – inhabitants of the extreme

Arctic char have a bit more fat then its salmonid companions so they are very suitable for frying. Before you can relish your own specimen though you have to come by one – and that can be a challenge in its own. They love extreme conditions – and they are the only fresh water fish species to be found above 80° North (the parallel of Spitsbergen).

They live mostly in cold alpine and arctic waters and healthy populations can be found in the mountain regions of Swedish and Finnish Lapland e.g. the area of Kilpisjärvi and especially in the Northern mountain lakes of Finnmark in Norway. One of our favourite areas in this regard is the Varanger Peninsula especially in the direction to Kongsfjord. It is one of those fish that can go from biting everything to total rejection in one second. We love it!

Fishing for Arctic Char in Scandinavia

Arctic char is usually cought by  fly- and spin fishing during summer and ice fishing in winter. It can reach impressive proportions and specimen over 10 kg (20 pounds) are not uncommon, though not so much in Scandinavia where a 5 kg fish would be considered a very good catch.

They feed mainly on snails, plankton, chironomids and also smaller char and other fish. Especially in summer chars feed on caddis flies, chironomid and scud so dry flies are a good way to pursue them. However a spinning rod can also be very- or even more effective, especially if you are fishing from the shore in lakes. And of course, there is always the possibility to use some worms.

We have seen many locals simply using a bombarda respective spirolino with a simple hook and a worm. This might be one of the most effective methods.

It’s a smooth-lined, silvery-gray, small-scaled predatory fish. The male Arctic char are extraordinarily beautiful during spawning. The coloration of the belly of the males varies from orange to deep red, the back is dark, with a hint of blue or green. The sides are dotted with yellowish and reddish spots, and the white edges of the fins are characteristic. There are no light spots on the back and stern, as brown trouts have.

Occurrence and origin of the Arctic char

This species has spread to the arctic and subarctic regions of the northern hemisphere. It is the most northerly inland fish species. Arctic char can be called a pioneer species, because after the ice age, together with trouts, it was the first to inhabit the water bodies created when the glacier melted. They require cool, oxygenated and clear water to live. Basically it is a lake fish, but it can also occur in mountain streams. 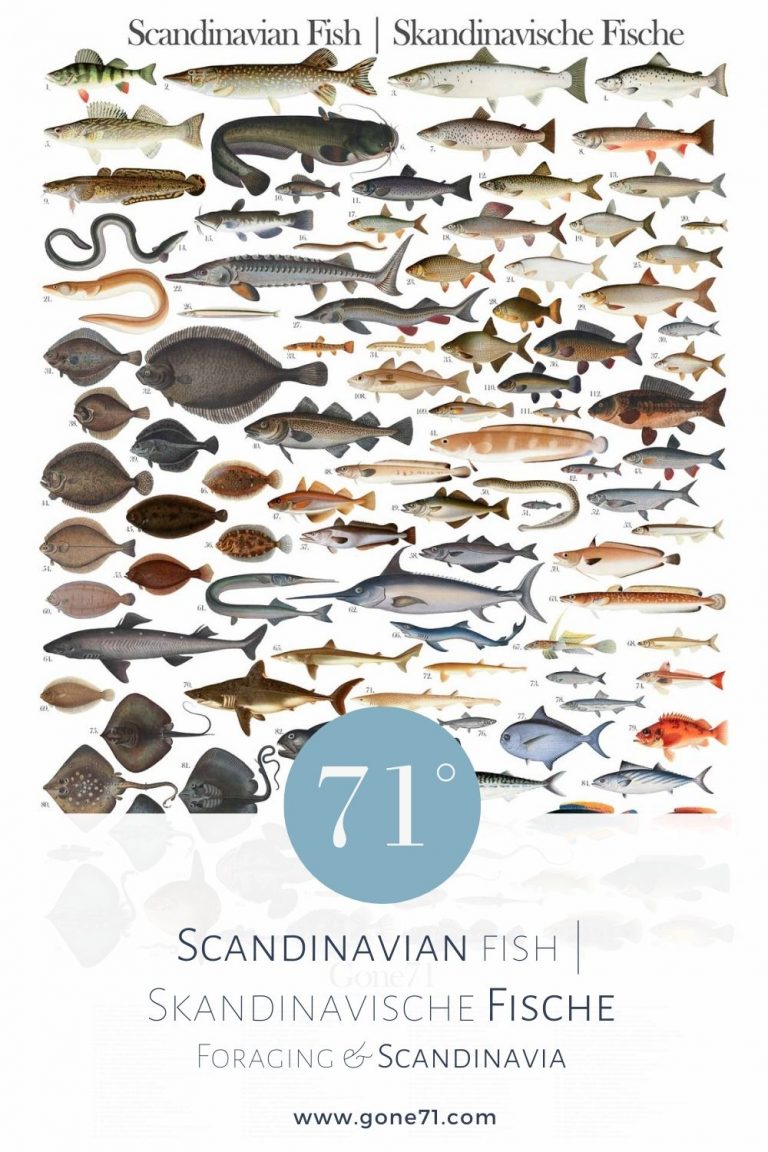 Chars are a diverse species that, like salmon and trout, can also have different growth and migratory characteristics (e.g. sea char). Even in the same body of water, there can be several different forms of char in terms of appearance and feeding.

On the basis of migratory behavior, a distinction can be made between anadromous “sea char” that roam in the sea and return to freshwater to spawn and hibernate, and local, all-life inland char. In Scandinavia, char that feeds at sea occurs in the Teno River basin and other rivers mainly in Finnmark.

Usually it is distinguished between large and small chars, which were originally considered to be different species. However the current understanding is that they are the same. Lake Inari in Finland for example is known for both small chars(paltsarautu), which mainly eat benthic animals and other invertebrates, and large chars, which eat fish.

In Lapland, char is a significant factor for tourism and sport fishing. They are often fished by trolling and especially ice fishing in winter. However, fly fishing and spinning are very popular methods too.

Food for the natives

They are also a very important food fish for Sámi people especially in Sweden and Norway. The species has suffered from the regulation of bigger lakes as well as water pollution.

Arctic chars, like their relatives salmon and trout, are autumn spawning fish. They spawn on the rocky bottoms of lake shoals and slopes, usually at a depth of 3-5 m in October-November. Young fish hatch in spring.

Large individuums can reach a weight of several kilograms and usually have a spawning size of 2-5 kg. In Saimaa, females reach sexual maturity at the age of 5-6, when they are on average 55-60 centimeters long and weigh a couple of kilos. The smaller version usually mature at 30-35 cm in length and weighing 250-300 grams.

Feeding, growth and migration of Arctic char in Scandinavia

Chars eat zooplankton, surface insects, benthic animals and fish. The size and growth rate between water bodies can vary greatly. Especially in the mountain lakes of Sweden and Northern Lapland individuals tend to be much smaller than in the big lakes e.g. in Central Sweden. The sea form of char migrates at the age of 3-5 from the rivers and returns after 2-3 months.

Sources & Information on this site

Data on this site was derived from various sources like Järviwiki,  LUKE database and own observations. 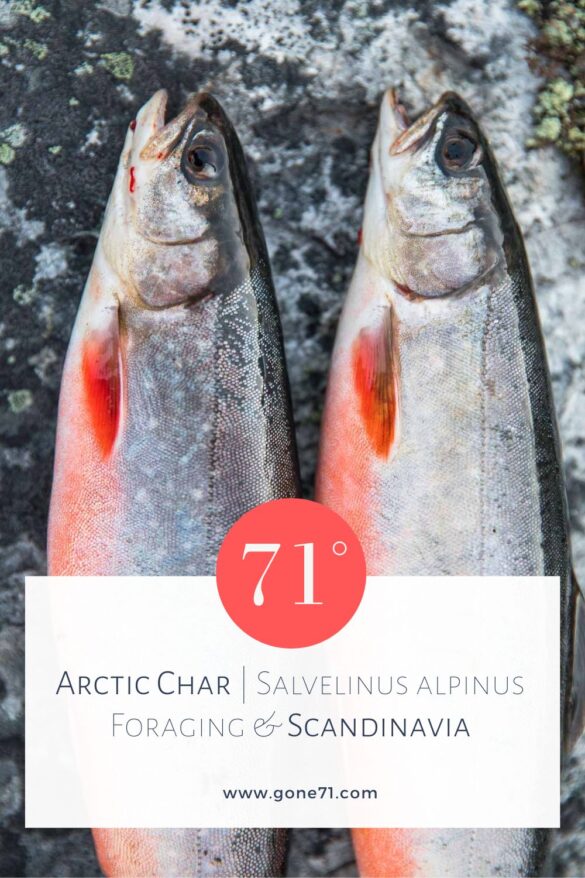 Encounter whales and dolphines in Norway (on your...