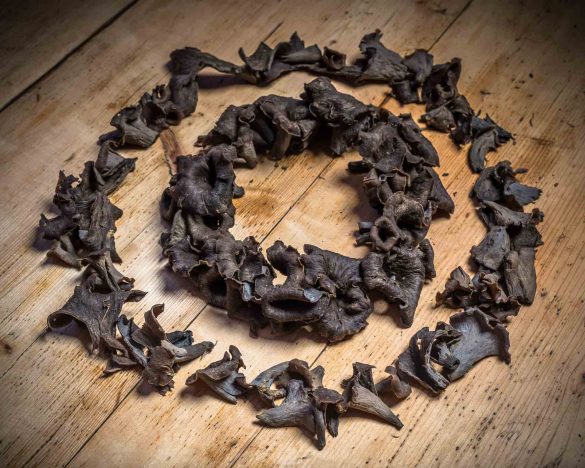 Some of the best! Horn of plenty, black chanterelles or black trumpets as they are also called are very intense and aromatic mushrooms. They are excellent for drying and strike a high market value. Since they cannot be cultivated they have certain exclusivity to them.

In addition to porcini and chanterelles, they are one of the few wild mushrooms that are regularly traded on local markets in Central and Northern Europe.

The hardest part is to spot them. Their black colour and camouflage look makes it sometimes very hard to see them on the forest floors. However, the good news is that these mushrooms tend to grow in the same area year after year. They are also not solitary and tend to grow in masses. So if you are lucky to find some, make sure to remember the exact place for the coming seasons and check your surroundings carefully for more. They prefer calcareous soils and usually grow in the company of beeches or oaks. Due to their black colour they are easy to mistake for rotten mushrooms at a first glance.

Due to their thin-skinned structure, trumpets can be dried very easily and then ground into mushroom powder

The hollow and funnel-shaped fruiting body is turned up like a trumpet at the edge and reaches a diameter of up to 12 cm. The surface is tomentose to flaky and has a brown-gray or soot-grey to black colour. The smooth outside is usually coloured light grey.

Like all Craterelles, black trumpets have no gills or ridges, but a largely smooth to wrinkled outer skin. The very thin flesh is also gray to blackish.

In rare cases, black trumpets could be mistaken for the inedible firesite funnel (Faerberia carbonaria) which is simply not very tasty. More likely, however, is the confusion with of the equally tasty gray Ashen chanterelle (Cantharellus cinereus), which is considered quite rare in Northern regions. In Central Europe we encounter them regularly and they grow very often right in between black trumpets. Confusing these might happen quite frequently since most people even do not know that these mushrooms exist.

However, caution is required if the mushrooms are already decomposing (e.g. after frost). This is identified by a very pliable, limp flesh instead of the otherwise brittle one. Potentially a confusion with other decomposed mushrooms is possible.

The hollow trunk should be checked carefully for dirt and unwanted inhabitants like insects or snails when cleaning. Sometimes it is best to simply split the mushrooms in half with your fingers. Clean them with a knife and a brush. Avoid rinsing them under water.

Black trumpets in the kitchen

Prepare them in a way that showcases their flavourful aroma. Even though they are also great in mixed mushroom dishes we prefer them solo – especially if used fresh. Some mushrooms that mix well are chanterelles, craterelles or milder species like hedgehog mushrooms and shaggy manes. 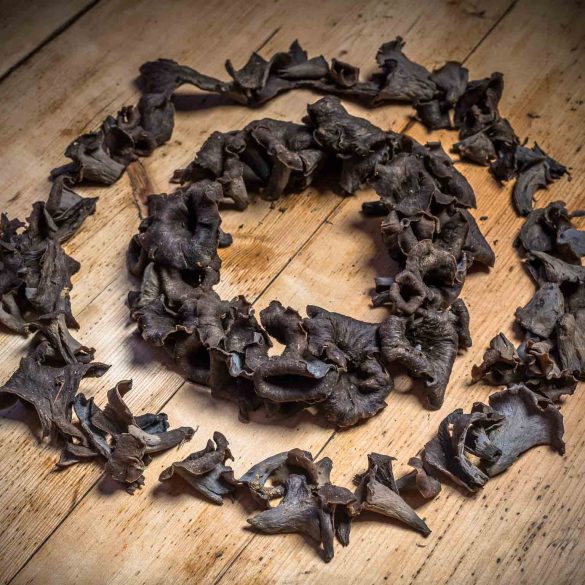 If you want to dry them, cut the cleaned mushrooms in half and put them in the oven. Leave them there at 45° C for around 3 to 4 hours. The oven must remain ajar during the whole time. For this you can e.g. clamp a wooden spoon in the oven door. Turn the trumpets once in a while so they don’t stick to the baking paper. The dried mushrooms can be stored in a jar for a very long time. You can also grind them to a very tasty powder and use it for seasoning. 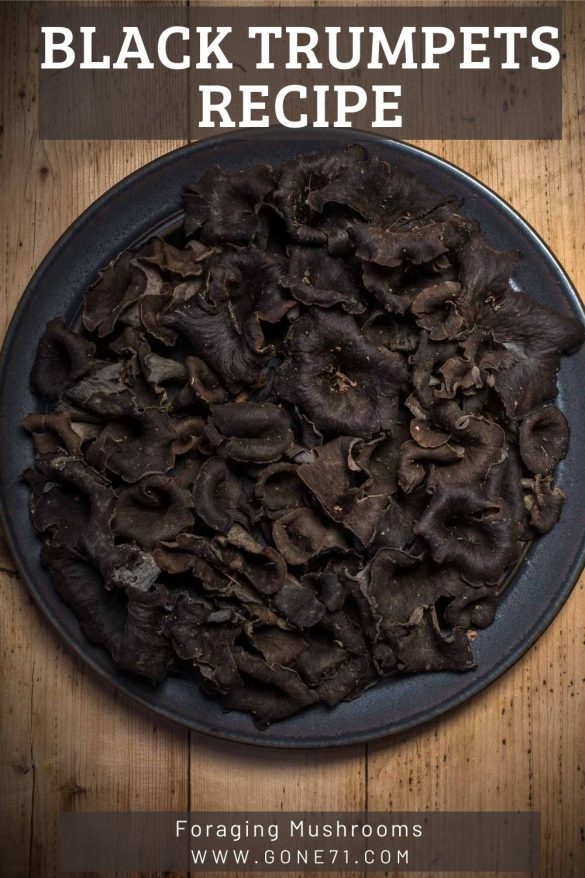