How to find a reindeer antler 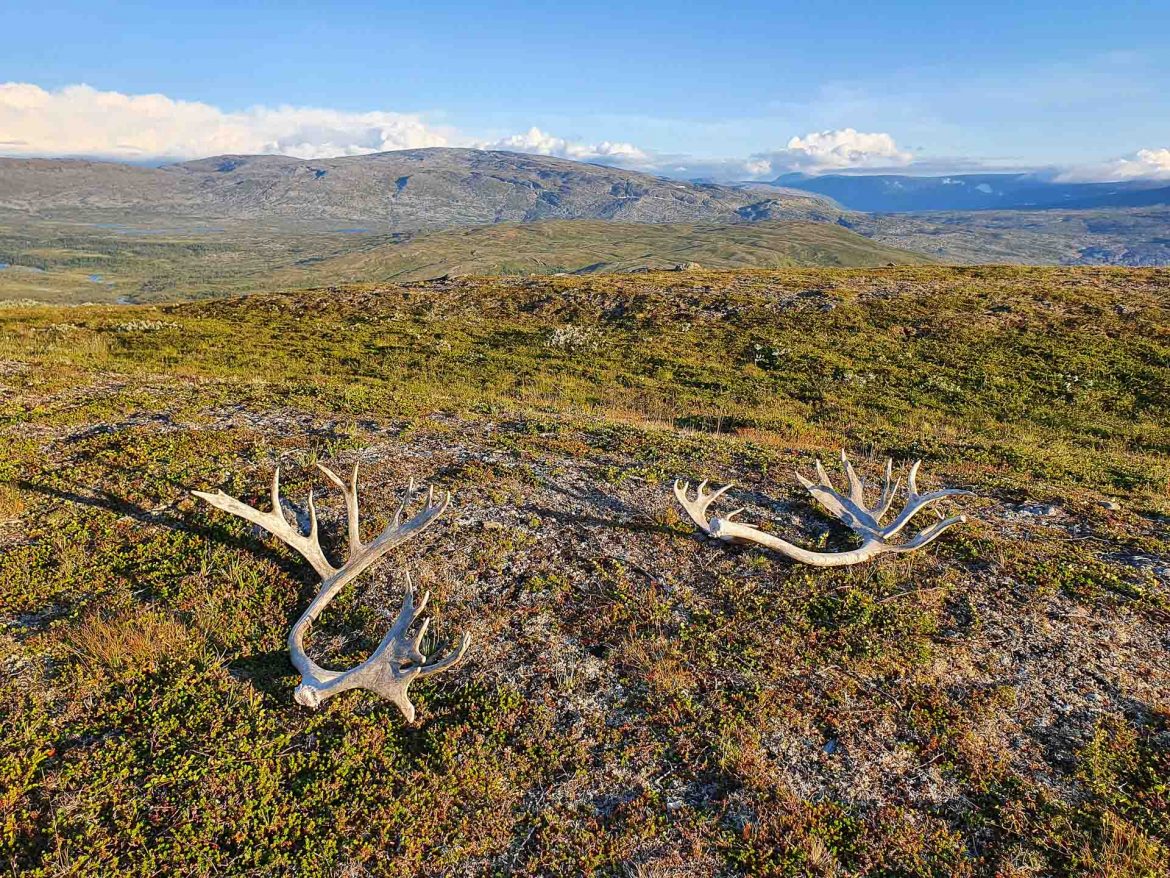 Finding your own reindeer antler is a great experience and the perfect trophy in order to remember your adventures in the North. So why not find one for yourself!

Well, unfortunately that is easier said than done and finding your personal reindeer antler will always be a matter of luck to a certain degree. You can improve your chances significantly though, if you know where to look and what to look out for. We offer you some advices that bring you some steps closer to your success. Ready? Let’s go!

The name reindeer comes from the old Norse word ‘hreinin’, meaning the horned animal. They are the only deer species where both male and female carry antlers and they are the same animal as the North American Caribou. They shed their antlers every year and with around 700,000 reindeers roaming the North of Scandinavia you can be sure that there will be a lot of antlers around, fresh and old alike. Hey, that’s good news!

The reindeer husbandry is a part of the Sámi culture and pretty much exclusive to the indigenous community. There are around 6500 active Sámi people engaged in reindeer herding and the most important product is their meat. Skins and antlers are also an important factor in handicraft for local and tourist industry alike.

Reindeers belong to someone!

Believe it or not reindeers are a semi-domesticated deer species in Scandinavia and all the 700,000 animals running around in the wild have in fact an owner. There are only a few exceptions to this rule like the Finnish forest reindeer that is a highly threatened sub species of reindeer with an estimated population between 800 and 2000. They are so rare and shy that they are very hardly seen by humans and live mostly in the forests of the Northern parts of Karelia. All the others are owned privately or in collectives exclusively by the Sámi people the indigenous people of Lapland.

And there is the first crucial thing to note: Since reindeers are the property of the Sámi people, technically their antlers belong to them as well. Since the Sámi make their living from reindeer husbandry this makes well sense. Especially if you take into consideration that reindeers are the most important symbol of their cultural identity. This means strictly speaking also that you are not really allowed to collect the antlers. The upside is, that in reality this seems to be quite a big grey area and probably no one will tell you to leave that one antler you just found behind. We have spoken to many locals and also officials in national parks throughout Scandinavia and mostly they are quite helpful to point you in the right direction. Still, show the locals respect and don’t push your luck by taking more than is appropriate. After all, remember what you came for, that one antler!

Now for the actual price! Antlers are a kind of bone that grows from the head and are quite different in material and structure to horns from cattle. They are a priced possession and make no mistake; also locals are eager to find them.

Reindeers shed their antlers usually right after mating season which starts in the end of September and lasts until October or November. The older males are the first o loose their head gear, followed by younger males. Females usually keep their antlers until they calv.

The regrowth (antlerogenesis) begins in spring. Antlers grow quickly and are covered in a velvet like skin. When the growing process is finished the blood supply is automatically cut off. This is also the time where a ring is formed at the break-off points (main shut off region). The velvet starts to whiter and fall off uncovering the hardened antler. At that stage reindeers are often seen rubbing their antlers against tree trunks to speed up the process. In the beginning they are red since the antlers are highly supplied with blood and slowly start to bleach out to get their actual colour. Reindeer antlers also get bigger from year to year and can have from a single shaft up to 12 branches.

Their purpose is versatile: to attract the other sex in mating season, for males to dominate over other males in head to head fights over females or to defend themselves from predatory danger.

When to look for reindeer antlers

The good news is you can find them all year round. In former times the Sámi followed the reindeer herds along their migration routes as nomads. Nowadays herds and individuals are often GPS tracked and their owners with snowmobiles collect the antlers when they are shed. Times are surely changing but with the huge area there are still plenty of antlers staying undiscovered behind. Mostly because they are shed in areas where the population density is so low that it is sheer impossible to cover all the terrain.

That’s your chance! For most people winter will be a difficult time to be in this area or to make extended trips without a snow mobile into the wild. Not to mention the darkness and the obvious reason that white, snow covered antlers can be tricky to spot. The time after snow melting is when things get interesting and the antlers that have not been collected start to surface again. Since you are not the only one with keen eyes, earlier is better in this case. Later in the year means that you compete not only with locals and especially tourist but also with rodents like mice or squirrels who find the calcium a great dietary supplement.

Where to look for antlers

Since reindeers live foremost in Lapland that is obviously the place to be in the larger scale. This includes Finnish and Swedish Lapland as well as the Norwegian part better known as Finnmark. Reindeers roam pretty much all kind of territory and you can find them in the middle of a town as well as 100 miles from the next sign of civilisation.

When looking for antlers you should stay away from populated areas. Fortunately that is quite easy in Scandinavia. The further away you get, the greater the chances that no one else has been in the area recently. Also avoid paths and places where a lot of other tourists wander the same tracks. You’ll most probably not be the first one there. Instead look out for territories where other people might not bother to go.

We have found antlers in many places all over Scandinavia. Some of the best finds have been in the very North of Finnmark even not far from the road. Think like this: The area is huge with almost no one living there. In this area there is always one road leading through the landscape often for 100 kilometres with little sign of other civilisation. There are some well maintained rest stops with nice viewpoints every now and then where people tend to stop their cars or caravans to rest, enjoy the landscape and take hikes. If you start looking in such places you will probably not find much since the area has the highest frequency of visitors. Instead stop your car where other people normally would find no reason to do so and simply walk of into the countryside for the next hour. You’ll still need luck but in our experience one hour in a good place can give you great finds.

Now, not everyone will get as far as 70°+ North but the main idea is always the same. Look in places where other people would normally not go. If you are not driving a car or caravan throughout the North you can instead always head of into the wild on your own. There are more national parks and nature reserves with good infrastructure (wilderness huts, fire places, trails) then you can probably cover in a lifetime. Set out for daytrips or overnight stays to get deeper into the wild just don’t get lost.

How to look for antlers

In our experience the best setting is the grassy tundra landscape with their endless amount of berry shrubs. Shed antlers look a lot like old tree branches lying in the grass. Since there are often no trees around you might want to take a closer look at that branch. You can notice them often from quite a distance since they differentiate from the monotone shrubby surroundings.

Go at a steady space and scan your environment in a larger scale. It’s not like picking mushrooms where you want to move with care in order not to overlook something. Instead you want to cover more ground while constantly scanning the wider area for something unusual in the landscape. Antlers tend to ‘reveal themselves’ in our experience. That notion is hard to explain but you might understand if you find one yourself.

We hope you will find your personal antler trophy at your next trip to the north and that our inputs may help you succeed.

Looking for a project on your next trip to the North? Make yourself a wooden drinking cup aka Kuksa:
Make a Kuksa step by step – a detailed guide

Interested in Foraging? Check out our detailed guide about foraging mushrooms, pickking berries, or catching a fish 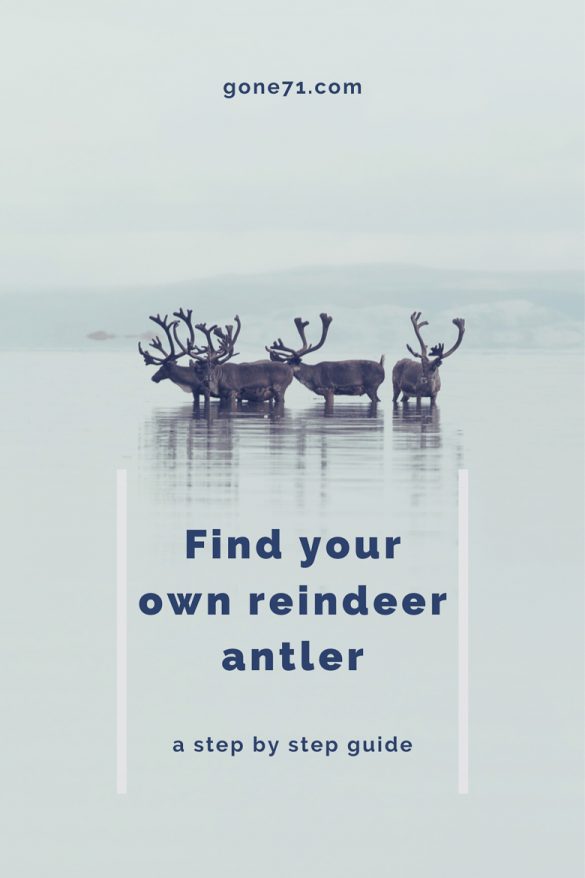 Why you should avoid North Cape & 6 alternatives

Catch a fish in Scandinavia or Finland – a detailed guide