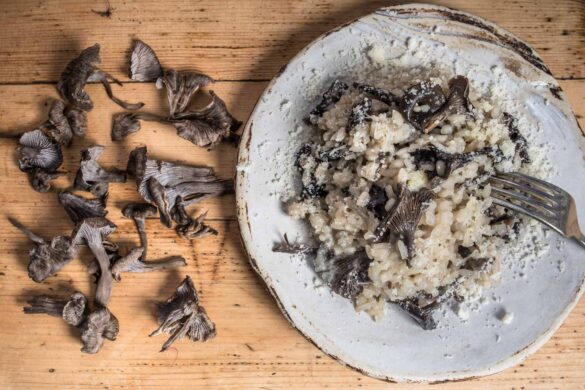 The ashen chanterelle is certainly one of the most inconspicuous mushrooms, and many people who collect black trumpets (C. cornucopioides) may have consumed some without knowing it. At first glance, these two species really do look confusingly similar. However, a closer look reveals an important difference: Ashen chanterelle have gills – black trumpets do not!

Recently I stood in an old beech forest in a huge field of black trumpets. Right in the middle, I noticed that there was also a relatively large amount of ashen chanterelles mixed in between. They stood right next to each other. Luckily, the ashen chanterelles are just as good, if not even better, edible mushrooms. They have a wonderful fruity smell and are just as suitable for risotto as they are for stews, soups or game dishes.

To find ashen chanterelles you have to know that they exist!

I think people only notice ashen chanterelle if they even know that these mushrooms exist. This may sound a little silly but once you have adjusted to the fact that these mushrooms are often very numerous and occur in a similar growth form to black trumpets, the probability of encountering them increases enormously. We now discover them very often, actually always in the same forests and at the same time of year as the black trumpets. They share a very similar growth habitat and favor the same weather conditions.

Once you’ve spotted some, it’s worth checking the surrounding area, as an ashen chanterelle rarely comes alone. They usually grow in clusters and sometimes cover relatively large areas of the forest floor. Often they are so inconspicuous that you literally have to watch where you put your next step.

Appearance and habitat of ashen chanterelles

The shape and greyish-black color of the fruiting bodies are reminiscent of black trumpets (Craterellus cornucopioides). Ashen chanterlles do not have a smooth surface on the underside, but rather clear gray ridges (gills). The fruiting body grows between 2 and 8 cm in diameter. Raw, they have a mild taste.
The main season for ashen chanterelles is from September to October where it can appear in big groups mainly in deciduous forests. We find them mostly in company of beeches. In Scandinavia it is relatively rare but there are places in Central Europe where you can find them frequently during autumn.

Confusing ashen chanterelles with other species

Ashen chanterelle are usually confused with black trumpets (C. cornucopioides) but can also be mistaken with Pseudocraterellus undulatus (edible) or Faerberia carbonaria (not tasty but considered “edible“). Non of these lookalikes are poisonous and the former two are considered equally delicious in taste.

Ashen chanterelles in the kitchen

Ashen chanterelles are excellent mushrooms for soups, sauces and mixed mushroom dishes. You can use them similar to black trumpetes but they are slightly different in taste and have a pleasant fruity note to them.

If we have the choice, we even prefer these mushrooms over black trumpets. It is always a great pleasure for us to find Ashen chanterelles and they are often used in several mushroom dishes at the same time. In this recipe we prepared them in a mushroom rice similar to risotto. The dark mushrooms give the food a strong contrast and are ideal for use in a single-variety mushroom dish. 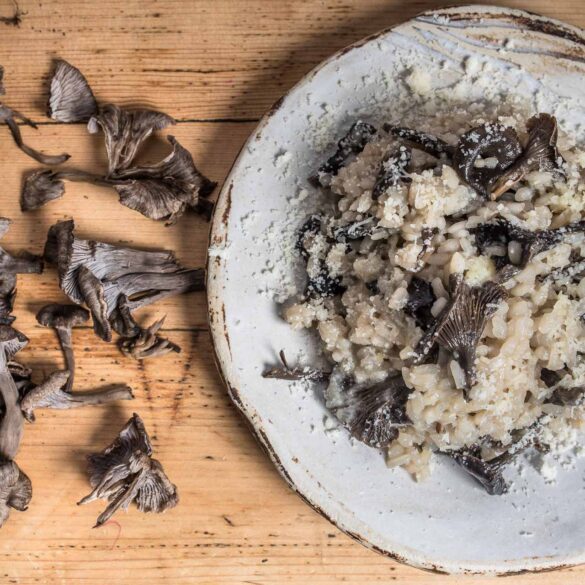 As soon as the rice is done, you can start eating - enjoy this delicious autumn dish. 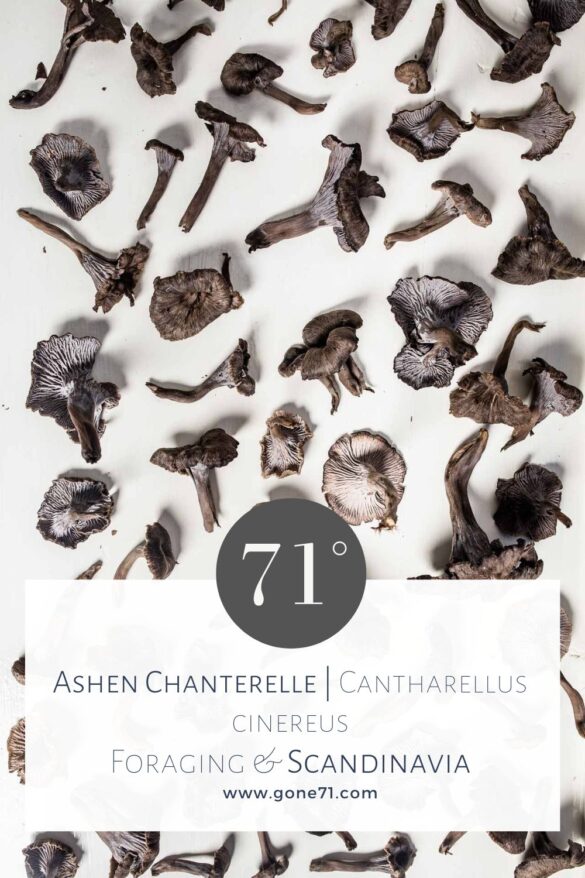